DISCIPLINE: ‘No place for beasts in disguise in government jobs’ …

‘No place for beasts in disguise in government jobs’    Timesofindia.indiatimes.com
Jun 5, 2015
NEW DELHI: The Delhi high court has passed stringent strictures against a government employee while junking his plea challenging downgrading of his rank for sexually harassing two family members of a female peon, saying “beasts in disguise” should not be in public service. …

Reinstate St. Stephen’s officer without conditions: HC   Thehindu.com
April 10, 2015
St. Stephen’s College, which had suspended and then re-instated administrative officer Subhash Kumar Dash on the conditions that he would have to render an apology to the chairman and vice-chairman of the governing body and be paid only subsistence allowance from January to April, was directed by the High Court here to reinstate him without any conditions. …

Special court attaches assets of controversial IAS officer Pradeep Sharma    Dnaindia.com 22
January 2015
In more trouble for Gujarat cadre IAS officer Pradeep Sharma, a special anti-money laundering court here had ordered attachment of his immovable assets worth about Rs 75 lakh in a case of alleged corruption and criminal conspiracy in allotment of government land to a firm. …

Ahmedabad judge sacked 14 years ago in false case reinstated with pay, seniority   Timesofindia.indiatimes.com
Jan 22, 2015
AHMEDABAD: Gujarat high court has imposed a token fine of Re 1 on itself for committing an error by suspending and later dismissing a judge in a false bribery case. …

CBI arrests Syndicate Bank CMD in Rs 50 lakh bribery case   Timesofindia.indiatimes.com
Aug 3, 2014
NEW DELHI/BHOPAL/BANGALORE: The Central Bureau of Investigation (CBI) on Saturday arrested the chairman and managing director of Syndicate Bank Sudhir Kumar Jain, his brother-in-law and four others for allegedly accepting a bribe to enhance the credit limit of private companies bypassing rules, making it one of most high profile cases involving a serving state-run bank chief in over two decades. …

Note: The above information is subject to the Disclaimer of Dtf.in. If you have a complaint with respect to any of the media news items published above, it may please be brought to our notice for an appropriate decision to remove the existing news item/s as early as possible or to publish the latest event, at info@dtf.in.

VN:F [1.9.22_1171]
please wait...
Rating: 4.0/5 (139 votes cast)
DISCIPLINE: ‘No place for beasts in disguise in government jobs’ ..., 4.0 out of 5 based on 139 ratings
bsnl CBI Jt. Commissioner of Income Tax LTC Scam Supreme Court order 2015-06-05
Admin.
Share
Previous Healthcare: A New Solution That Stops Snoring and Lets You Sleep; Why should you have soaked almonds …
Next HEALTHCARE: Communal bathrooms are hothouses for toothbrush bacteria … 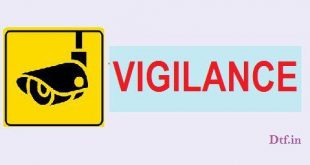 ‘Over 700 CBI investigations pending for more than a year’: Central Vigilance CommissionDon’t Act On …

By continuing, I agree that I am at least 13 years old and have read and agree to the Terms of services.
[userpro template=login]
Why do I need to sign in?
DTF is a knowledge-sharing community that depends on everyone being able to pitch in when they know something.
Or wait 60 seconds
VN:F [1.9.22_1171]
please wait...
Rating: 4.0/5 (139 votes cast)
DISCIPLINE: ‘No place for beasts in disguise in government jobs’ ..., 4.0 out of 5 based on 139 ratings