Osmania University PIO fined 10,000 for failure to reply to query

Thehansindia.com
May 24, 2016
Hyderabad: The Public Information Officer (PIO) of Osmania University was fined Rs 25,000 on Monday, for “non compliance” of Telangana Information Commission’s orders and for his failure to provide information to the appellant even after six months. …

Timesofindia.indiatimes.com
May 15, 2016|
Gurgaon: The chief information commissioner of Haryana has imposed a penalty of Rs 25,000 on estate officer-II of Huda, Gurgaon for delaying a piece of information sought under the RTI Act for over 11 months. …

Timesofindia.indiatimes.com
Apr 17, 2016
Hyderabad: The Right to Information Act (RTI) has been enacted with a lofty goal of ensuring transparency and accountability in the working of every public authority and is considered a powerful instrument in the hands of citizens to expose corruption.

Economictimes.indiatimes.com
Apr 6, 2016
NEW DELHI: The Central Information Commission has directed the environment ministry to share a copy of the bio-safety document related to genetically-modified mustard and the raw data of studies with the caveat that provisions of the Cartagena Protocol on Biosafety as well as confidentiality should be kept in mind. …

Zeenews.india.com
March 15, 2016
New Delhi: In a major procedural change, the Central Information Commission has done away with the mandatory provision of sending signed hard copy of appeals through post even though the appellant approached it online. …

Timesofindia.indiatimes.com
Mar 13, 2016
NEW DELHI: Ministers in the Union and state cabinets are “public authorities” liable to answer public questions addressed to them under the Right to Information Act, the Central Information Commission has ruled. …

Tribuneindia.com
February 28, 2016
State Information Commissioner Ravinder Singh Nagi has issued a show-cause notice to the District Education Officer (Secondary) for not providing the information to the appellant Hardeep Singh, a resident of Dabwali Road area, sought under the Right to Information (RTI) Act. …

Feb 16, 2016
Delhi and Bombay high courts, however, mention on their judgements both dates—on which judgement was reserved and when judgement was delivered
New Delhi: The Supreme Court on Monday confirmed a Delhi high court verdict which said the court registry couldn’t be directed to collect information on how long judgements on cases remained pending under the Right to Information Act. …

Hindustantiems.com
Feb 15, 2016
Should a government department spend Rs 27 to get an RTI applicant to pay a fee of Rs 8?

Zeenews.india.com
In a warning to the RTI applicant, Acharyulu said, “The Commission records its admonition against the appellant for misuse of RTI against the school child and warns him against such misuse in future.
January 26, 2016
The Commission admonished the principal of RD Public School and Central Public Information Officer (CPIO) of Directorate of Education (DoE) of Delhi government for disclosing information about a student to his relatives who had a dispute with the student’s family. …

RTI activist Commodore Lokesh Batra had filed an RTI request seeking data on the number of judgments reserved and kept pending between 2007-09.

Indianexpress.com
The Delhi High Court on Thursday set aside the order of its single judge bench that had required the Supreme Court registry to provide information under the RTI Act on the pending cases in the apex court on which orders had been reserved. …

Outlookindia.com
New Delhi | Jan 03, 2016
Email IDs of all government officials cannot be provided under the Right to Information Act as it could cause a serious security threat, the Central Information Commission has ruled. … 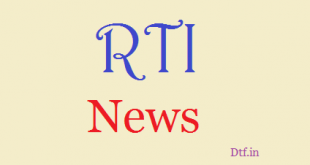 RTI: Provide footage recorded during RAS mains to candidate: Rajasthan Information Commission; CIC to Have Same Status as CEC, Babus Not Only Ones Fit For Post: SC …

RTI: Differently-Abled Not To Be Deprived Of Benefits Of RTI Act: SC Directs Authorities To Explore Advanced Technology To Make Information Accessible To Them …