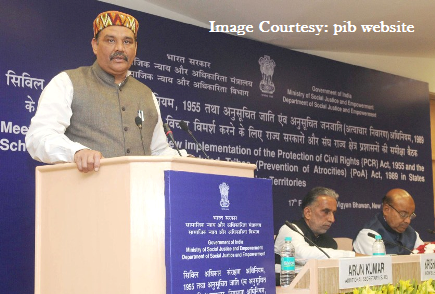 Tamil Nadu: Dalit man hacked to death in full public view for marrying Thevar girl in Tirupur
The women who refuse to do India’s dirtiest job
I was asked my caste at Dwarka temple: Kumari Selja
Rajasthan: Dalit student beaten for touching utensil in school
More …

Firstpost.com
Mar 14, 2016
In yet another incident of caste violence in Tamil Nadu, a newly-wed couple was beaten up by goons in full public view in Udumalpet, Tirupur, on Sunday, after which the culprits then hacked the man to death. …

The women who refuse to do India’s dirtiest job

Theguardian.com
March 01, 2016
Ranikumari Khokar is campaigning to end a caste-based practice that condemns women to cleaning human waste by hand
Every morning I would take a broom and tin plate to the homes of the upper caste thakurs to pick up their faeces. I would collect the waste in a cane basket and later throw it in a dumping ground outside the village.” …

I was asked my caste at Dwarka temple: Kumari Selja

Timesofindia.indiatimes.com
Dec 1, 2015
NEW DELHI: Congress MP Kumari Selja created a stir in Rajya Sabha on Monday by claiming that she was asked about her caste when she visited the Dwarka temple in Gujarat as a Cabinet minister. …

Timesofindia.indiatimes.com
Oct 04, 2015
A 10-year-old Dalit student of a government school in Osian tehsil sustained minor injuries after his teacher allegedly thrashed him for touching utensil when the mid-day meal was being served inside the school premises, the police said on Saturday. …

Death by tractor: A tale of two FIRs   Timesofindia.indiatimes.com
Jun 7, 2015
Case lodged by Jats claims Dalits fired first and were mowed down by tractor driven by own kin but FIR delay and missing weapon are telling. …

Derecognition row: National scheduled castes panel sends notice to IIT Madras    Timesofindia.indiatimes.com
May 31, 2015
NEW DELHI: The national scheduled castes panel has sent a notice to IIT Madras over the de-recognition by the premier technical institute of a students’ group, several of whose members are from the Dalit community, allegedly following a complaint that it was critical of Prime Minister Narendra Modi. …

Dalits in MP village not allowed to use public borewell   Timesofindia.indiatimes.com
May 23, 2015
ALIRAJPUR: Dalit residents of Ghatwani village in Alirajpur district of Madhya Pradesh — some 400km from Bhopal — have alleged that they are not allowed to use a public borewell and have to drink dirty water of a disused well. …
Emperor Ashoka caught in caste row   Timesofindia.indiatimes.com
May 20, 2015
PATNA: Within days of BJP officials gathering under the Rashtravadi Kushwaha Parishad rubric to celebrate the 2320th birth anniversary of Emperor Ashoka, historians assailed the party for claiming that one of the country’s greatest rulers ever was a Kushwaha by caste. …

‘Barbers refuse to cut hair of Dalits’   Thehindu.com
May 03, 2015
After the recent incident of Dalits being denied haircuts at salons at Panjiganahalli in Sira taluk, a similar case has surfaced in Kadagathur, Madhugiri taluk. …

Mention of caste-based abuse sans details can’t attract provisions of SC/ST Act: HC   Indianexpress.com
April 30, 2015
Mere mention of an allegation in the FIR that the complainant was referred to with caste-based remarks is not enough to take cognisance of the offence made under the Scheduled Castes/Scheduled Tribes (Prevention of Atrocities) Act (commonly known as the SC/ST Act), the Allahabad High Court has ruled. …

Dr. Ambedkar: Maker of Modern India   Countercurrents.org
01 April, 2015
Dr. BabaSaheb Bhimrao Ambedkar was born in an untouchable caste which was deprived of all social, educational, religious and political rights. …

CASTE: Caste slur an offence if made in public: HC …